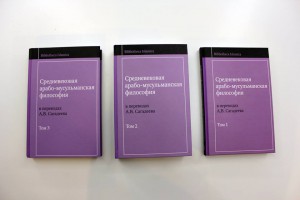 The closing volume of the commented translations by a prominent researcher, philologist and historian Artur V. Sagdeev (1931 - 1997) includes works of the pleiad of the Late Classical Peripathetic School thinkers and theologists such as Ibn Badjja, Ibn Tufail, al-Ghazali and Ibn Rushd,  as well as as-Sukhrawardi and Ibn Fatik, the philosophers of Post-Peripathetic Islamic tradition.

Collected edition of documents, dated 1926,  recovering tactics of Soviet security service towards Muslim religious leaders in early 20s. The collected data shows that among their authors might be not only security operatives, but, probably, also experts-orientalists, specializing in Islam.

The book investigates the phisophical doctrine of Abu Hamid al-Ghazali (1058 - 1111), one of the most celebrated scholars of almost encyclopaedic knowledge in the history of Sunni Islamic thought, whose works  are considered as the essential part of the spiritual heritage of Classical Islamic theology and philosophy.

The evolution of his personality and primary concepts of his philosophic system in were under strong influence of  the cultural palette of the Khalifat as well and classical intellectual traditions of the Greek Antiquty.

Main focuses of an author's study are sources of his philosophic system, its complexity and development.  A research combines an academical founding and the author's knowledge of working material and proficiency of the cultural tradition that makes this book interesting not only for specialist in Classical Islamic Philosophy, but the development of the World philisophical trends in general.