“Children paint fairytales” – is an open international educational art project, which has brought together children from Russia, Kazakhstan, Uzbekistan, China, Kyrgyzstan and Tajikistan. Children artworks from Cheboksary were largely shown at the exhibition, held in the Pushkin State museum of Fine Arts in Moscow. Since the date kids from the Republic of Chuvashia have become competent members of the project. This is the first time the exhibition visits Chuvashia. The best art school students’ artworks from Cheboksary and Novocheboksarsk are granted a certificate of degree. 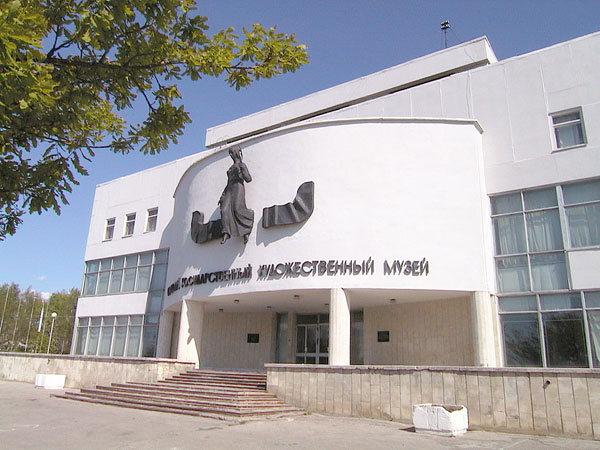 Among children attended the opening were students of the first grades of the Cheboksary Special General Education boarding school and the 2nd Licée as well as others. Kids were warmly welcomed by actors of the experimental mime theatre “Dojd’” and guided by clowns to the central hall, where the official opening of the exhibition took place. The enchanted princess, Koschey the Deathless, Baba Yaga,  Kikimora, a squirrel, a dancing cabin on the chicken legs by actors of the vaudeville dance school “Solntseklesh” under the direction of Elena Yaroslavtseva met visitors on Lukomorye at the entrance.

Among high guests were Viacheslav Foshin, the First Deputy of the Minister of Culture of the Republic of Chuvashia, Alexander Andreev, the Children’s Commissioner for the Republic of Chuvashia and Mikhail Yukhma, a Chuvash national writer. Viacheslav Foshin and Alexander Andreev expressed their thanks to Irina Zakharova, a Senior Staff Worker of the Pushkin State Museum of Fine Arts, Murad Zargishiev, a Vise-president of the Mardjani Foundation and Yulia Volodina, a Coordinator of Cultural programs of the Mardjani Foundation for noticing active attention to the problems of children.

Concert program included a Tatar and Chuvash folk dances dance by “Suvaryata” (rus., “Little Suvarians”) under the direction of Irina Muzykantova, followed by “A little squirrel” and “Baba Yaga”, solo dance personations by Ekaterina Stiopkina and beautiful songs “Fairy tale” and “My time” by the “Single” Vaudeville Studio under the direction of Veronika Arisova.  The show was concluded by a concert performance by a troupe from Tractor Constructors’ Culture Palace and audio fragment by Mikhail Efremov from the Collection of the Chuvash fairytales, edited by the Mardjani Publishing House

Within the exhibition a series of master classes for children were organized. The first one on Origami was run by Irina Kapitonova, a member of Saint-Petersburg Center for Origami and a pedagogue from the  54th Public School. She taught children to create three-headed dragons and cranes. The second master class on creating national dolls was undertaken by Galina Izratova, a member of the Artists’ Association of the Republic of Chuvashia, Elena Kalinina and Olga Fedotova, pedagogues from the Elli Yuriev Children Art School. Sharing national culture with children is very important in the modern educational system, so Galina creates dolls, trying not only to reproduce specific details in dressing, but also to personalify them through individual features. Elena and Olga helped kids to learn how to make a doll from such improvised materials as threads, ribbons, paper and clue.

A book exhibition “The fairy chest” was organized by the Chuvash Republic library for Children and Youth within the frame of “Children paint fairytales”. The exposition was divided into the following sections - foreign fairytales, modern fiction fairytales, Chuvash fairytales and everlasting fairytales. Along with the exhibition a library staff also held a quiz, so that kids could demonstrate their knowledge and wide reading. The most popular were “Smeshariki”, whose appearances and names kids recognized most.