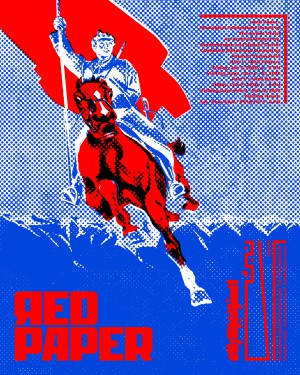 After holding a number of exhibitions, panel discussions, and other events, from the winter of 2020, Nabshi Center is carrying on with its largely archive-based activities. Four projects will be held every year, each presented in two or three parts, based on its scale and content, and it will be concluded by launching the project’s book.
“Red Paper” is the second joint archival project by StudioKargah and Nabshi Center, held in two parts within the new seasonal approach of Nabshi Center. The first part, “Red Poster,” is going to be held from January 3 to 31, and the second part, “Red Book,” will be held from February 7 to March 13. Both parts of “Red Paper” will include film screenings and talk sessions, the details of which will be announced through the Nabshi’s social media. Moreover, “Red Paper,” which is the result of researches and studies for this exhibition, will be launched in the second part of the show.
Given the long-standing relationship between Iran and Russia and the need to study the Soviet Union’s cultural policies that have played a major role in the Iranian contemporary history and its visual culture, “Red Paper” is an impartial review of Soviet-produced papers and its visual documents designed to have a cultural influence on Iranians and the neighboring Muslim countries. Despite the fact that some of these documents were meant to export certain ideologies in a cultural or artistic packaging, they have undeniable connections to the life and visual memories of present-day Iranians.
The first part of the exhibition, “Red Poster,” takes a historical, visual look at the pre-October turmoil and the period between the two world wars in the Soviet Union. As a preamble to the historical study in this section, the documents of Soviet-Iranian relationships prior to the Russian Revolution, i.e., the Czarist period, are categorized and displayed. On the other hand, the visual section of the “Red Poster” consists of posters made for the public, especially Muslims, in the southern and eastern Russia, designed, produced, and distributed between the two world wars for ideological purposes. With their allusive language, these posters point to the spread of the Russian worldview after the October Revolution to “outsiders.”
Also consisting of two visual and historical sections, “Red Book” is the second part of the upcoming exhibition, consisting of paper documents that represent the Soviet’s exported politicized culture to Iran. The historical section displays the documents of the political and cultural relations between Iran and the Soviet Union in the period between the Russian Revolution and the Iranian Revolution, and the visual section exhibits books published in Farsi by the Progress Publishers in the Soviet Union to be exported to Iran. The publishing house had published a wide range of books, from novels, astronomy, and science, to cultural, communist propaganda, to children’s literature.

The end of the Cold War and the transformation of the ideals of the remaining front into a dominant world discourse have diminished the productive or destructive role of the other side, making the “Soviet cultural policies” into a subject worthy of historical study. However, for the Iranian society, which has widely welcomed the attitudes and imports of the “red ideology” since the very beginning, its role and effects—whether out of love or hatred—are still closely connected to life.

With the change of Iran’s political system, an attempt began to turn away from the power struggles of the era. Even though the rivalry ended only a few years later with the collapse of the Soviet Union, its impact on the formation of our contemporary history and culture is undeniable. As a neighbor of one of the two superpowers of the Cold War and allied to the other, Iran was always the victim of their conflict and a battleground for them.

The sedimentation of its memories, its not-too-far-away, not-too-close distance, and even the shadow of the thinkers—both advocates and opponents—of the Eastern Front, that still looms large, make it difficult to objectively examine the Soviet’s role in our culture. This is especially the case because some of this neighbor’s actions were not only the result of its direct presence and involvement, but also achieved by its Iranian “comrades” back in the day. Thus, if we are to study that role, we need to take a closer look at the primary sources, as opposed to collaged, secondary ones, of this cultural dialog. Obviously, an understanding of the background of this relationship is of great importance, and the multifaceted historical contexts have to be taken into account.

“Red Paper” focuses on the almost unilateral cultural-political relations of the two nations, seeking to represent the message of the Soviet Communism with impartiality by displaying the ideological paper-pictorial productions of the Soviet Union for Iranians and the neighboring Muslims. 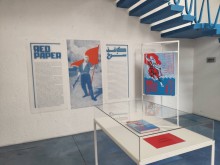 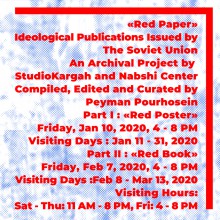 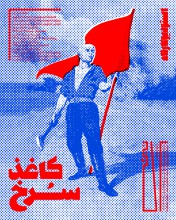