It was elaborated in 2004 by the Pushkin State Museum of Fine Arts as an elaborated a target program of artistic education for children. “Reading fairytales, painting fairytales, knowing each other” – these words were chosen as the program catchword. Its essence is to introduce children to various national cultures and hereby to arouse their interest to their native culture.

With this idea we addressed to the Shanghai Cooperation Organisation (SCO). Founded in 2001 by the leaders of Kazakhstan, Kyrgyzstan, China, Russia, Uzbekistan and Tajikistan it particularly has forming common humanitarian space for an object of its activities. India, Iran, Mongolia and Pakistan, however, participate as observers, some of whom have expressed interest in becoming full members in the future. All these countries have unique and ancient cultures with distinctive historical and national traditions.

Well, where do fairytales come in? How the centuries-old folk fantasies helps educating children and teaching such manners as friendliness, solicitude, condolence, curiosity and desire for learning other cultures. After all, why the subject of fairytales is selected?

The answer is simple and complex at the same time.

First of all, a fairytale is commensurate to the consciousness of a child. It makes a child meet  the traditional way of life and customs, calendar holidays, clothes, a household and its articles, a house and its atmoshere. Frequently reading a tale, a child finds words, which are out of everyday use, and asks parents or even grandparents to help. This is one more characteristic of a fairytale: it unites a family and helps meeting generations. A folk tale excites child’s curiosity to learn obscure words, names,  and to apply to parents experience in conclusion-making.

Tales speak a figurative poetical language, in which every word has strict meaning and certain usage.  It’s why a tale is used in developing creativity and imagination of a child. If the hero knows an incantation, he knows how to wring water from a flint.

We invited children to take part in this project. Parents and teachers were to be very careful instructing them in realization of this project. The work was laborious but very interesting. There were not only a paraphrase of a plot, but introduction to the national traditions, customs, clothes, ornaments and symbols to be done. Pedagogues told children of geography and climate, traditional food and goods, anthropological types and so on. 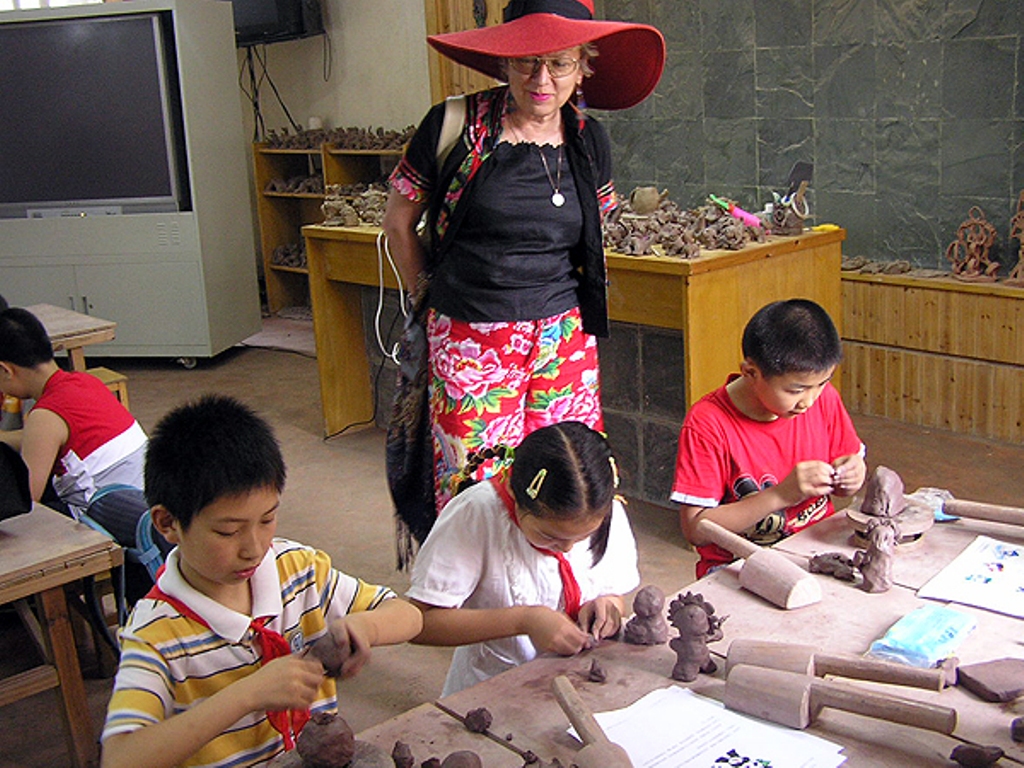 The circumstances were such that the first lessons began in Beijing. We let the Chinese children meet heroes of “The Magic Swan Geese”, “Aldar Kose”, the Nasreddin stories and etc. through the traditional national arts and craftworks.  They shared the plays and were not listeners and viewers, but actors disguising national costumes.  Traditional national arts and craftworks and play education gave us a great opportunity to show them  the most specific of national morals and manners, customs and traditions.

The project was supported in other countries, and finally the  SCO secretariat received  more than 10 000 works.  It resulted in the exhibition “Children paint fairy tales”, which opened in The China National Museum of Fine Arts in Beijing in May 2005 and was attended by Mr. Zhang Deguang, secretary general of the Shanghai Cooperation Organization and leaders of diplomatic missions.  During the exhibition the project staff visited nursing houses for children with limited possibilities and nursery schools, where they met children of different social groups.  They invited children to take lessons, organized by the museum. Their works were presented at the stand inside the museum and a special panels oustide. 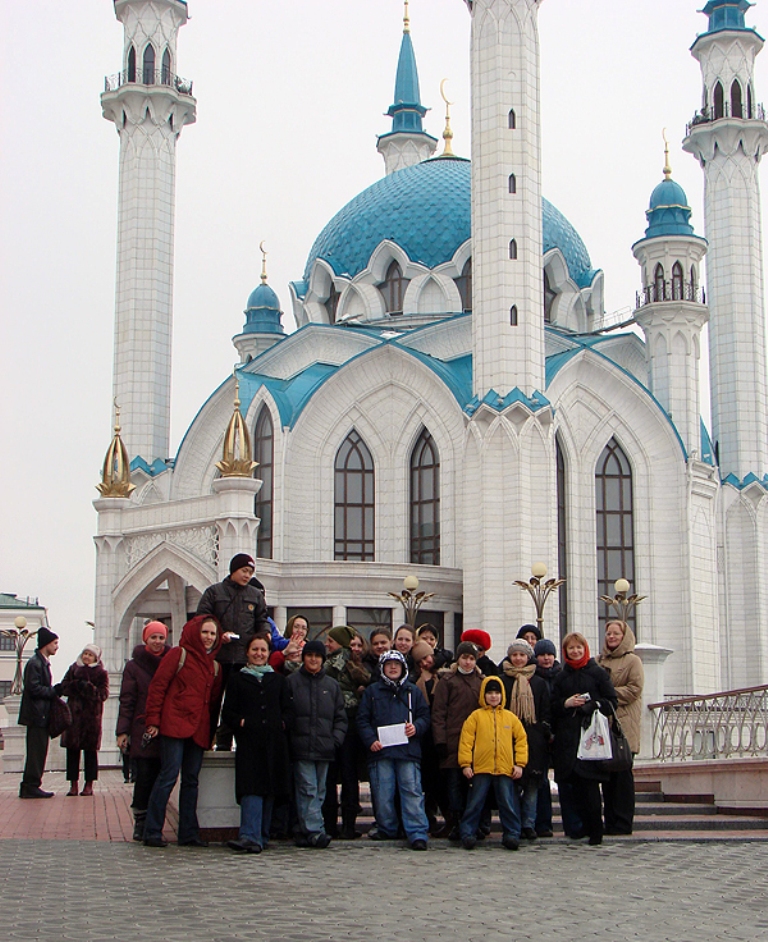 After Beijing the exhibition was held in the Congress Hall in Astana, Kazakhstan  being timed to the the  SCO summit. Then it visited Changzhi, the province of Shanxi of the People's Republic of China. For the exposition the whole area of a new supermarket was used.

Invited the exhibition to visit Tashkent by the Academy of Arts of Uzbekistan, the exhibition opened in January, 2006 in the Republican College of Arts. At the vernisage children in national performed sketches, dance and music. Within the exhibition, we organized special master-classes and trainings for postgraduate students of the Academy, pegagogues and artistic school supervisors, as well as  family audience.  The exhibition drew the highest official response.

During 2006 “Children paint fairy tales” was successfully held in Shanghai, Guangzhou and Hangzhou.

Finally, on April, 11, 2007 it was celebrated by the Museion, the Centre for Esthetic Education of Children and Youth under the Pushkin Moscow State Museum of Fine Arts. The Museum welcomed diplomatic leaders of the SCO member and observer states, representatives of the Russian Ministry of Foreign Affairs and the Russian Ministry of Culture and many children and their from Uzbekistan, India, China, Iran and Mongolia.

The vernisage was opened by Irina A. Antonova, the Director of the Museum, who warmly congratulated guests and visitors on opening of the exhibition. Children from family groups played “Aldar Kose and Shiganbay” from the Kazakh tale cycle about Aldar Kose. The performance was accomplished with landscape views from the film about Kazakhstan. It was followed by a wide program; it included a Kyrgyz flute play, Russian and Indian national dances, the Chinese Dragon dance, the Nasreddin story etc.

On August 10, 2007 the exhibition visited the Atiev Museum of Fine Arts in Bishkek in a run-up to the SCO summit. The program of the exhibition was organized in the assisstance with  the Republican Methodological Center for Esthetic Education “Balajan”. The opening day program included folk dance performances and recitation of “Manas”, a traditional epic poem of the Kyrgyz people dating to the 18th century. Special attention was drawn to the collection of handmade dolls in traditional costumes by children from “Balajan” and “Museion”.

In 2008 in the assisstance with the Mardjani Foundation “Children paint fairy tales” was held in Kazan, Elabuga and Naberejnye Chelny. The exhibition events were supported by play performances of Tatar fairytales; children of “Museion” family groups met children of regional artistic schools and centers and visited theatres and other cultural sights.

On March 17, 2009 the “Children paint fairy tales” met the Moscow audience in the State Museum of Oriental Art. Within the exhibition we held series of master-classes – children met historians, artists, graphic and fashion designers, musicians and artisans. We hope, that this unbelievable experience will help children in their further connection to this museum and its abundant oriental collections.

On May 24, 2009 the exhibition opened in Dushanbe, Tajikistan. The exhibition introduced works of alumni of five artistic schools and two Republican Centers for Esthetic Education of Children and Youth.

There are many new countries and cities ahead. It is no accident that “Children paint fairy tales” is sometimes called the exhibition of the Young Itinerants.

The international exhibition “The tales through the children’s eyes” sponsored by the Secretariat of the Shanghai Cooperation Organization, the Pushkin Museum of Fine Arts and the Mardjani Foundation was held from March,18 till May,10 in  the National Art Gallery “Chazine” in Kazan. This event coincided with the so called Year of the Family what the year 2008 was announced of.

An exhibition “Children paint fairytales” featuring more than 10 000 works of the young artists from Kazakhstan, Kyrgyzstan, China, Russia, Uzbekistan and Tajikistan was opened in the Republican College of Art of Mirzorahmat Olimov in Dushanbe in May, 23, 2009. There was presented the great diversity of children’s imagination embodied in their drawings, paintings, tapestries, batiks and beadworks.

Exhibition of children’s art works, featuring about 250 works from different groups and classes, including paintings, papier-mâché, embroidery, lacemaking, patchwork, ceramic and leather handcraft was held from September 28 to October, 4 2009 in the Museum of Decorative and Applied National Arts in Moscow as a final phase of the major exhibition “Talented Children’s All-Russian Exhibition”. 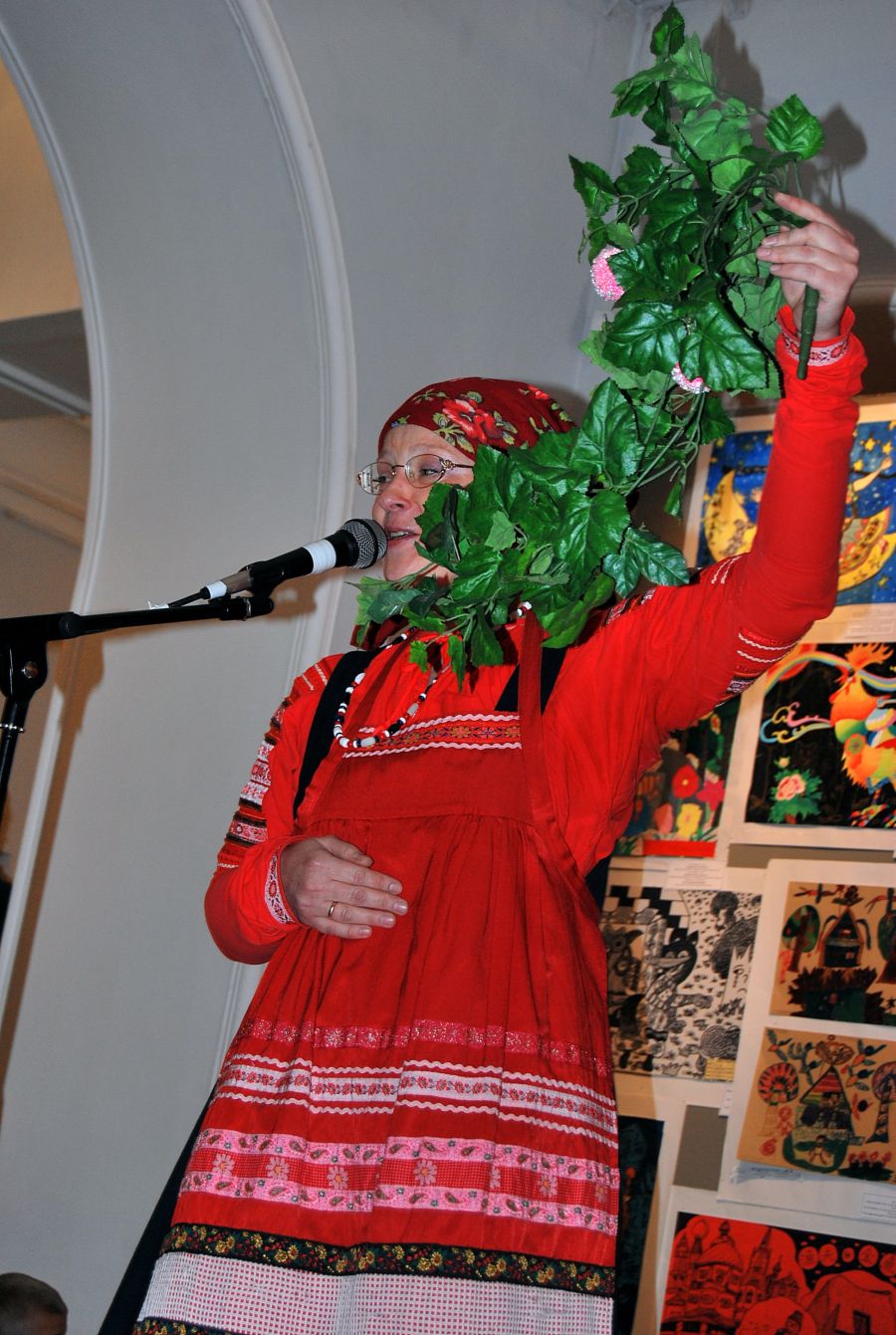 World of Russian Tales the Museum of Decorative and Applied National Arts in...

Celebration of the Kazakh Culture in Museion 2010